FREE DOWNLOAD HERE
Jesus of Nazareth interview from the eBook
Party of Twelve: The Afterlife Interviews

This Sunday on the second 2017 Re-Boot Teleconference, our featured guest will be Kimberly Lilith Phelps, my co-author of Diaries of a Psychic Sorority: Talking With the Angels. Her next book, Second Coming: Awakening the Christ Within is set to release this Spring. In it, she refers to the Second Coming of Christ as the emergence of the Christ within, as each of us awakens to our own God-given ability to heal ourselves and thereby change the world.

Lily and I go back a long way. Because of the conflicts between us (and there were many!) we were able to field test Einstein’s theory on how to effectively deal with conflict. Even though they called themselves “Angels” back then, their brilliant, compassionate message was the same one that the Party continues to deliver today. But without Lily and my conflicts and our willingness to test out these new perspectives while we were fighting, Conflict REVOLUTION® would not exist.

What I love about Lily’s new book is her unique interpretation of the teachings of Jesus. We’ll spend some time Sunday talking about the cross-over of her Jesus as seen through the Bible, and the Jesus I channeled in Party of Twelve. (Hint: Not much difference!)

As I was preparing for the show, I decided to re-read the beginnings of the Party from Party of Twelve: The Afterlife Interviews:

Upon his death, Albert arrived in the Afterlife in need of rest. The idea of evil haunted him. He took long walks alone, concerned about the world he had left behind. With the atom bomb a reality, had he just unwittingly contributed to the demise of the entire planet? What if he was indeed responsible for helping to supply the world with a suicidal weapon of mass destruction? Would that make him evil?

Albert met often with the many who had lost their lives in the Holocaust. They seemed to move as a force of compassion. Because of their intense suffering together, they were bonded in a way that even they didn’t quite understand. Together they explored the meaning of their participation in one of the most devastating and evil periods on Earth.

Evil seemed to fascinate and confound Albert. How could a force of such sweeping devastation and complete absence of empathy and compassion originate from such a divine infrastructure? And more importantly, why? These questions haunted him. 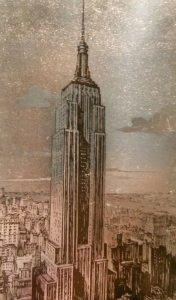 In the form of an answer, one afternoon he unexpectedly found himself standing before a jury room door. Etched in the glass was the Empire State Building, one of his favorite haunts from life on Earth. He chuckled over this New York City depiction of a world on trial. Opening the door revealed three figures huddled at the far end of a long, twelve-person jury table.

One man was sitting facing the door, intently taking notes and listening to a second man who was hunched over in a chair speaking under his breath. Facing them both stood a third man whose hands, which appeared to be glowing, rested on the shoulders of the dark, sloughed figure. Albert could clearly see that the discussion was extremely grave. The mysterious, huddled figure was relating a story of deep agony, and the glowing hands returned only love and forgiveness.

Albert approached the men cautiously. First recognized his old friend Sigmund Freud. Oh, he had not seen him since Berlin! As their eyes silently met, Sigmund signaled him to listen and they both turned back to the pathetic figure bent over himself in the chair.

Darkness clung to his skin like soot. His cheeks were drawn and tight around the bones of his face. The air around him smelled of agony.

Then Albert realized: he was watching Adolph Hitler being attended to by Jesus.

Adolph was truly in a living hell, but not the classical sense of going to hell. Hell was coming out of him, from his deepest insides, burning away every second with agonizing, torturous guilt and unbearable responsibility for what he had done. He was plagued by questions about his life as well. Why did he do it? What was the purpose? And how long would he suffer in the Afterlife for the crimes he had committed? Why was he even conscious? Why hadn’t he just turned to blackness on his death, not fit to be alive? For every question, Jesus had an answer.

Albert was fascinated, amazed, confounded, and inspired, all at once. In life, Albert had despised Hitler, so much so that Hitler alone inspired Albert to abandon his pacifism and encourage the war against the horrible Nazi empire. It was Hitler’s power that troubled Albert so much that he wrote the President and urged him to develop nuclear weapons. But this display of pure compassion by Jesus was breathtaking. To every sin, every grotesque description of some horrid act of the Holocaust, Jesus responded only in love, forgiveness, compassion, and truth. Albert was, for the first time in a long time, speechless.

As they talked, Sigmund took meticulous notes. Soon Albert joined into the discussion and the focus turned gently from Adolph’s hell to the world they had left behind and the new world they were living in. Einstein expounded on his passion to communicate what they were learning in Afterlife to those they’d left behind. The four talked for what seemed like days. Sigmund wrote like a madman the entire time.

On Sunday we’ll discuss Jesus, Hitler and forgiveness, as well as continue my ongoing REV of the “Trigger of Trump.” Lily is a Republican, and she and I hope to find some creative solutions to the issues that are dividing us politically as well.

Please join us! Always free! And sign up to follow my blog and get all the latest updates on Einstein, the Party, and me!