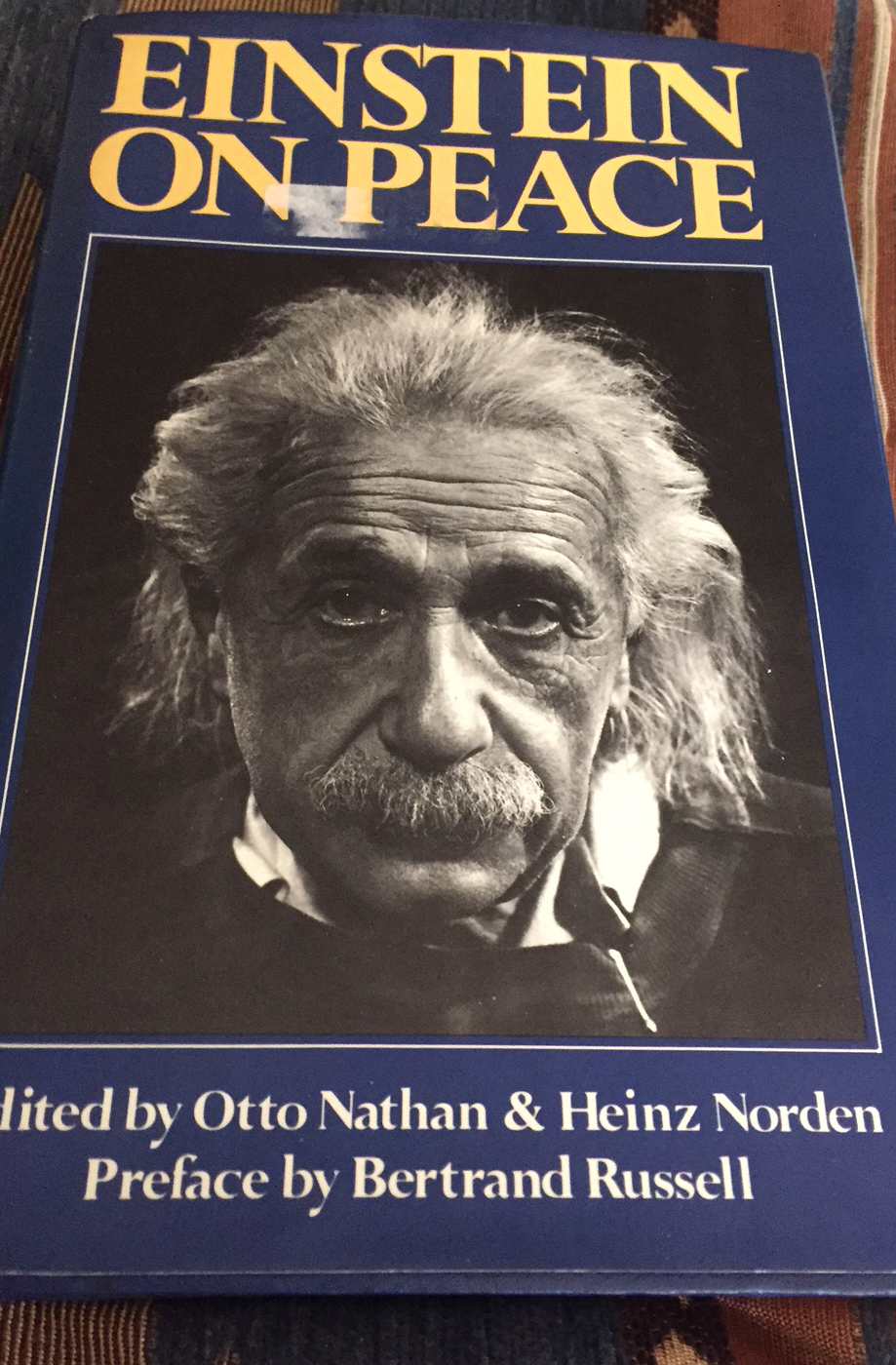 Last week, my sister gave me the book Einstein on Peace by Otto Nathan and Heinz Norden. Published in 1960, it’s a comprehensive picture of Einstein from 1914, when he left Switzerland to settle in Berlin, through his death in 1955. Using quotes from articles, papers, and letters, the book brings to life more than 40 years of Einstein’s lifelong struggle to abolish war and find peaceful solutions to conflict. It includes his pacifist awakening during WWI, being targeted by Hitler, and fleeing Germany to save his own life.

Through all the years that I’ve talked to my Imagined Einstein, I’ve never read this book. The parallels to what I’ve learned from him in Afterlife are simply astounding.

Of particular interest to me are his thoughts about the Nazi uprising in Germany and how they targeted him personally. I’ve long felt my Imagined Einstein has come back to share the wisdom he acquired during that time, as the world now moves dangerously close to what he warned us could happen.

The propaganda that Hitler put out about him was ridiculous. According to Bertrand Russell, Einstein’s theory of relativity was “condemned as a Jewish trick of which the sole purpose was to bewilder Aryans. It seems that Hitler and Himmler could not understand it and rashly inferred that no Aryan could.”

The slander against Einstein was done with the intention to declare him an enemy of the state, which would then allow them to seize his property and denounce his efforts to confront their tyranny. Wisely, Einstein had transferred assets to the US. Though he had taken a job at Princeton, he had not intended to move there. As a member of the Prussian Academy of Sciences, he was planning to spend his summers in Berlin. But when Hitler and the Nazis came after him, moving to the US seemed most prudent.

In 1933, the Prussian Academy accused him of spreading atrocious lies about Germany when he spoke out openly against “the seizure of unlimited power … by a political constellation that defied all moral and ethical laws and openly glorified war.” Sadly, even Einstein’s close associates were affected by this hate campaign against him. Standing up against the lies the regime was spreading might cost them their lives. Even Max Planck encouraged him to resign, saying it would spare his friends “considerable grief.”

Einstein worked tirelessly the rest of his life on world peace. The night of his death his notes were left unfinished on the bedside table, still addressing the resolution of conflict:

“In essence, the conflict that exists today is no more than an old-style struggle for power, once again presented to mankind in semi-religious trappings. The difference is that, this time, the development of atomic power has imbued the struggle with a ghostly character; for both parties know and admit that, should the quarrel deteriorate into actual war, mankind is doomed. Despite this knowledge, statesmen in responsible positions on both sides continue to employ a well-known technique of seeking to intimidate and demoralize the opponent by marshaling superior military strength. They do so even though such a policy entails the risk of war and doom. Not one statesman in a position of responsibility has dared to pursue the only course that holds out any promise of peace, since for a statesman to follow such a course would be tantamount to political suicide. Political passions, once they have been fanned into flames, exact their victims …”

Those were his last written words.

Is it really such a stretch to consider that, upon his passing, he would explore the nature of life after death? Who else but Einstein was brilliant enough to figure out the reality of Afterlife, formulate a theory to create “world peace, one person at a time, starting with each individual,” then communicate his findings back to those of us in bodies and inspire us to test his process?

And to the question I ask myself constantly, “Why me?” Why not me? It had to be someone. I am just sane enough to consider his message seriously and still crazy enough to step forward and agree to be his emissary.

What I do know is that my Imagined Einstein’s unified field theory, maps of human consciousness and Conflict REVOLUTION present a practical avenue for creating peace, one person at a time. People around the world, myself included, have used Con Rev to transform our lives and create miraculous outcomes that could not have been achieved by addressing the conflicts at the level at which they were being created.

So what will it take to get you to stand up?